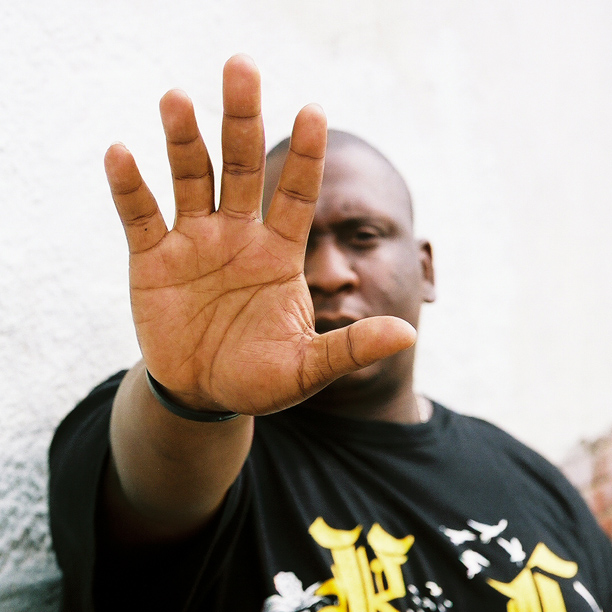 Reach is a self-described “blue collar rapper” in Kansas City who unleashes a more personable, reality-based brand of hip-hop.

Rather than rely on stereotypical and derogatory subject matter such as bling, bullets, and booty, Reach (aka Stacy Smith) puts forth a positive message backed by distinct Euro-lounge rhythms and melody with elements of soul, jazz, and R&B from Copenhagen beat maven Twelve Beats.

Present: What do you consider the Golden Age of hip-hop? What artists represent that era?

Reach: The Golden Age for me would be between 1986-1996. That 10-year period represented such growth and diversity. The spectrum was wider then. Rap was edgy during those years.

Present: What do you bring to the form today as a blue-collar rapper?

Reach: I think I bring honesty to the table. Something that everyday people can easily identify with. Tragedy, triumph, love, life…

I speak to the human experience…I’m a “meat and potatoes” kind of artist.

Present: “Walk the Line” is a song that addresses a dedicated “daily grind” work ethic balanced by an “I’m on the way” ambition. Is this reflective of your life as a person and an artist rising from the Kansas City hip hop scene to new vistas?

Reach: They say that art imitates life. I think my personal life informs my music. And I think many of my characteristics as an artist seep into how I live my life everyday.

Present: How did you connect with Twelve Beats, a producer and beatmaker out of Copenhagen, Denmark?

Reach: I was a regular at a www.beatsociety.com which was a website for Rap producers. Twelve was one of the beatmakers on the site I stumbled upon. I contacted him initially to get a few tracks for a future project. We had a couple conversations, but were never able to agree upon a reasonable price for beats. Talks broke off for a while… Months later, after he’d had the chance to digest my music, he suggested we work with one another and see where we could take it. Twelve songs later we were at the end of an album.

Present: Twelve brings a refreshing sound to the album, Corner Speech. It’s chill with a lounge vibe, but enough beat and digital spice to support your vocal delivery. What sound were the two of you going for on this record?

Reach: We wanted an album that was reflective of our collective musical tastes. Jazz, R&B, soul, rap. We hoped we could mix all of that up and come away with something soulful, funky, and melodic. It’s a really cohesive record as a result.

Present: How would you describe your vocal style?

I’m an “in pocket” emcee. I try to lend something to the track rather than stand over it. A lot of artists call it “riding the beat.” I want to find my place in the melody and live there. I see my voice as just another instrument that has to mesh with the other sounds in the track.

Present: You’ve opened for national acts including The Roots, Big Daddy Kane, Trek Life, Abyss (HBO Def Jam Poet), Sound Tribe Sector 9, Pharcyde, Blackalicious, and Soulive. What have you learned from other artists in the industry that you want to emulate or avoid in your career?

Reach: The artists I’ve worked with all say the same things. And it’s mostly related to staying on top of your business. Seizing control of business matters and being involved in business that affects you. They taught me never to accept short change. Oddisee, an emcee/producer, gave me lots of advice. He gave me new angles on how significant touring can be to an artist’s career. Overall, they gave me a foundation and solid principles to build with.

Present: Tell us about “Dance in the Rain.”

Reach: I wish I could say something poetic about the song. Basically, it’s just a song that speaks to the experiences of black women in my life. From the hardship associated with single motherhood, to difficulty fitting inside of Euro-centric standards of beauty, to the bumps and bruises of dating and romance. I guess the song was born out of the many nights I spent listening to women who were struggling with those issues. The concept of the song is applicable for women of all ethnicities, but I had the black woman in mind when I wrote it. I was raised by women so they’re dear to my heart and I wanted to do something that dealt with what they often go through.

Present: Let’s dig into your background more. Tell us about Stacy Smith as a person. How would you describe yourself as a person? Are there any life experiences that definitively helped to shape who you are?

Reach: I’m a regular guy I suppose. A bit on the nerdy side, but cool. Ha ha. Spiritual, fair, compassionate, kind, loving, free-spirited. I think my exposure to music in the early stages of my life made me who I am today. I’m driven by it. Inspired by it. Made of it. If I ever went deaf, death would be right around the corner for me.

Present: As the father of a son, how does that role in life shape the messages you want to deliver as an artist?

Reach: I think I write everything with my son in mind. I screen a lot of what he listens to. As a responsible parent, I think that’s my job. So when I’m writing, I try to deliver messages that’ll aid him along the way. I also make sure to keep it clean. Sometimes the words we choose weed out certain people. I’m not in a position to criticize the language other artists use. That’s not my place. I just don’t want someone to be in the dark about my music because of the language I chose.

Present: The video for “Comin’ For You” is slick. Stylistically, it reminds me visually of Missy Eliott videos, innovative and untypical of the hip hop genre. Who directed it? How did the concept develop?

Reach: The director for the video, Asif Mian, hails from Brooklyn, New York. It was really his vision. He pitched a couple of different ideas, but the end result was the one he thought would garner the most attention. Missy was one of the artists he named in the treatment stages of the video. He wanted to do something retro. He wanted it to have an 80’s feel. So that’s what we went for in everything from the wardrobing aspects to the set. The song had a throwback feel to it so he tried to match the visuals to the audio.

Present: Want to give a shout-out to contributors on Corner Speech and what they brought to the table?

Reach: I really just want to thank everyone who I interact with on a daily basis. They inspired Corner Speech more than they realize. Let me also take time out to thank my producer and partner on the project, Twelve Beats. Without him this would be a completely different album.

Present: What else do you want people to know about you and your music?

Reach: More or less, I just want people to listen. Just listen and make your decisions later. My music is for the people. As a practice, I pray before each live performance that my music makes positive change in someone’s life. That’s paramount. But then again, so is entertainment. Can’t just be a message. It’s gotta be good music. I could’ve been a preacher if all I wanted to do was deliver a message. The dress code isn’t as flexible though. So, I dropped the “P” from my name and the rest, they say, is history.