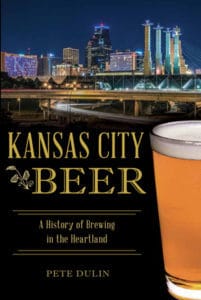 Kansas City Beer: A History of Brewing in the Heartland is now available. Since the official book release date of Oct. 24, 2016, the book is available at many local retailers and online. The History Press published this brewery history book as part of its American Palate Series.

This book was fascinating to research because it involved finding “facts” in several ways. I studied old city records from the mid-1800s and dug through publications and marketing brochures of yesteryear. I contacted historical societies and reviewed digitized copies of books on Google. For any brewery that existed prior to 1989 when Boulevard began, research involved sifting through print and online sources. No one from the late 1800s to early 1900s before Prohibition was alive to interview!

For more contemporary breweries, such as Boulevard Brewing which was founded in 1989, I was able to interview key people including founder John McDonald and others. I reached out via social media to track down people that once worked at former breweries and brewpubs in the 1990s. Again, I perused online articles, websites, and other resources as well as reading book and print material. Perhaps the most fun part was interviewing the modern generation of Kansas City brewers from the 1990s to present, knowing that their stories fit in the sequence of history I was assembling as a book.

In the introduction to Kansas City Beer, I link the history of the city with its brewery history. The latter is innately tied to the former. During the process of writing and after completing the manuscript, I felt keenly aware that I was recalling, defining, and recording history from past and present. In a short span of time, my book will seem like ancient history. Even now, I find myself observing and thinking about current events, whether it is brewing or politics or social change, through the lens of history to provide a long-term perspective.

I’m pleased with the final result of Kansas City Beer. It’s easy to read with short profiles of nearly 70 breweries from roughly the 1850s to 2016. Much has happened in the history of Kansas City and its breweries. 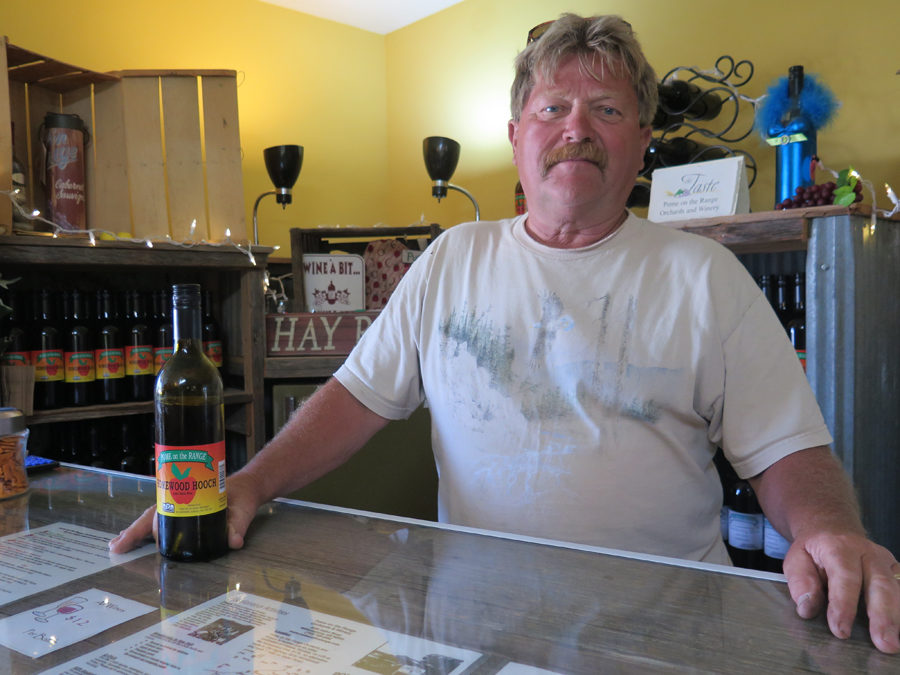 Expedition of Thirst: Pome on the Range Orchard and Winery

Before arriving at Pome on the Range Orchard and Winery in Williamsburg, Kansas, the drive from Kansas City involves reaching escape velocity along the twisting construction zone lanes of I-35 South. Past the suburb of Olathe and outlying towns of Gardner and Edgerton, uninterrupted prairie stretches out lean and flat.

By early June, hot dry winds blow across green and golden fields bleached by the sun. Purple prairie clover and white clover blankets ditches and subtly sloping hills. Highway patrol cars in the median shine like beetles and bask like turtles in sunlight, waiting to bolt like jackrabbits and strike like rattlesnakes.

The Sioux word “Kansas” has been interpreted to mean “people of the south wind.” After an hour’s drive, I take exit 176, rumble along Idaho Road, pull into the gravel drive of Pome on the Range Orchard and Winery, and find a Kansan before me. Owner Mike Gerhardt, dressed in a faded beige shirt and navy shorts, stands next to a tractor and chats with another man. They both exhibit the copper-red tan of farmers and ranchers, men at home in the sun and soil. 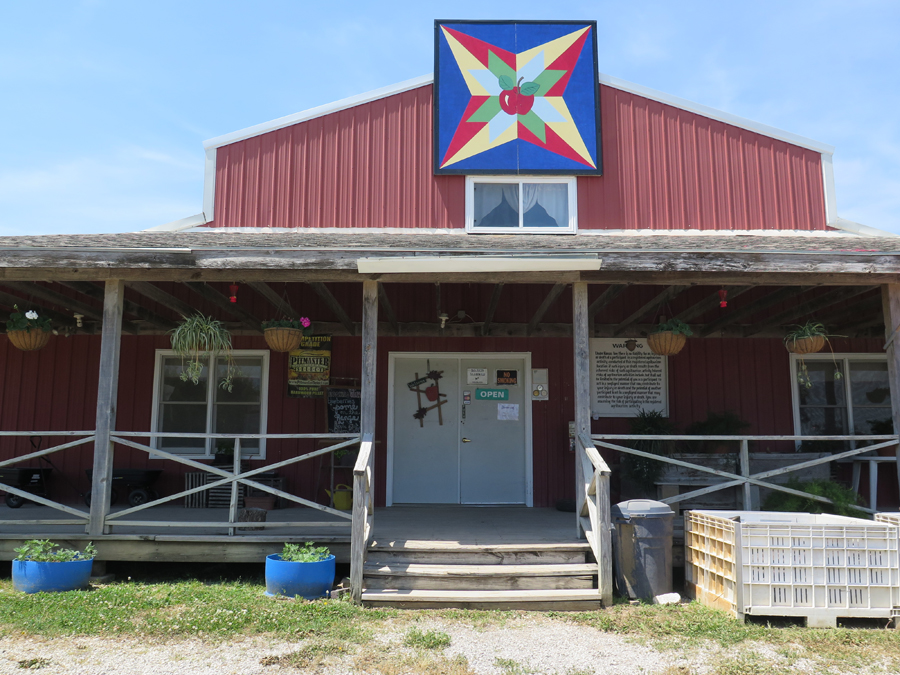 Inside the tasting room, I introduce myself and explain that I’m researching regional wineries, breweries, and distilleries for a forthcoming travel guidebook, Expedition of Thirst. Gerhardt, looking gruff at first behind a blond, thick bristle brush mustache, leans back against a counter. He answers questions about the orchard and winery that he owns and operates with his wife Donnie. Later, I learn that Kelly, a tall young woman with blue eyes that works at the shop, is also a fourth-grade teacher.

Gerhardt reels off details about apple varieties that make the best cider and fruit wines. He doesn’t grow grapes or use them to make wine. Instead, he blends fermented apple juice with juice concentrate from blackberries, raspberries, blackcurrant, and other fruits to produce his wines. At 2,000 gallons, the small-batch winery is only part of the orchard’s business operation. The shop and tasting room also sells locally-grown fruits and vegetables and preserves, honey, and other goods produced in the region.

During the course of our talk, Gerhardt talks about customers that unknowingly use fruit as a device to access memories of childhood. A customer might ask for a certain variety of peaches or Black Diamond watermelon, convinced that the specific variety of fruit is the best ever. Gerhardt locks eyes with me and slowly shakes his head. No, he says, there are other peaches or watermelon that taste much better. When the supermarket or a farmers market stand carries “peaches and cream” sweet corn, customers snap it up by the dozen. Actually, Gerhardt points out, that corn is most likely Ambrosia or another variety. It is only called and marketed as peaches and cream because that’s the name the public has associated with sweet corn.

People often latch onto the idea of fruit from a farm, a specific variety in particular, not because it is truly the best, but instead the fruit reminds them of a childhood memory. Gerhardt shares a personal story of growing up on a farm, where the house had no air-conditioning. During summers, the family ate evening meals on a wooden table in the south part of the yard under a shade tree. It was too hot to eat in the house. After dinner, the family dined on cold sliced watermelon. Gerhardt doesn’t recall the taste of that watermelon but it prompts the memory of his youth and family meals.

Of course, Gerhardt’s observation reminds me of author Marcel Proust and his famous insights from “Remembrance of Things Past” that ties a memory to madeleines, or small cakes.

Buying peaches, watermelon, sweet corn, or other farm-grown foods becomes a device for tapping into memories and a prop for sharing stories around the kitchen table. Most of us do not live, or haven’t lived, a rural agrarian lifestyle. These trips to the farm or supermarket to buy “farm fresh” produce helps us access an idealized nostalgia of childhood, even if the memory is imperfect. Or, the trip inspires a feeling of something pure and authentic although we didn’t experience farm life firsthand growing up. None of this commentary is meant to suggest that visiting and buying at the farmers market or direct from the farmer isn’t worth your while.The best best is to venture to the source. Talk with the farmer, rancher, winemaker, brewer, and baker to learn, taste, and touch the food, wine, and farm-produced goods. Before recollection, there must be the collection of experience.

Expedition of Thirst: Exploring Wineries, Breweries, and Distilleries in Central Kansas and Missouri (University Press of Kansas) will be published in fall of 2017. This series of posts documents stories and observations of the people and places I encounter during my research and travels that won’t necessarily be included in the travel guidebook, due to its size and format. 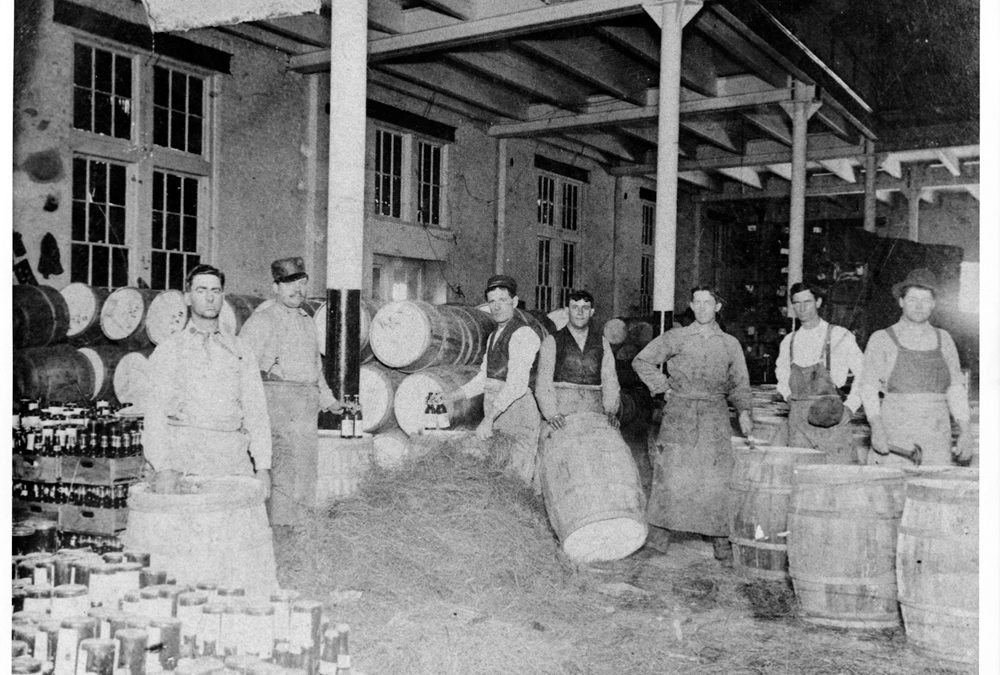 Kansas City Beer: A History of Brewing in the Heartland

I can finally reveal the cover to my next book, Kansas City Beer: A History of Brewing in the Heartland. The book will be published by American Palate, an imprint of The History Press and Arcadia Publishing. The publisher will release the book in October 2016. 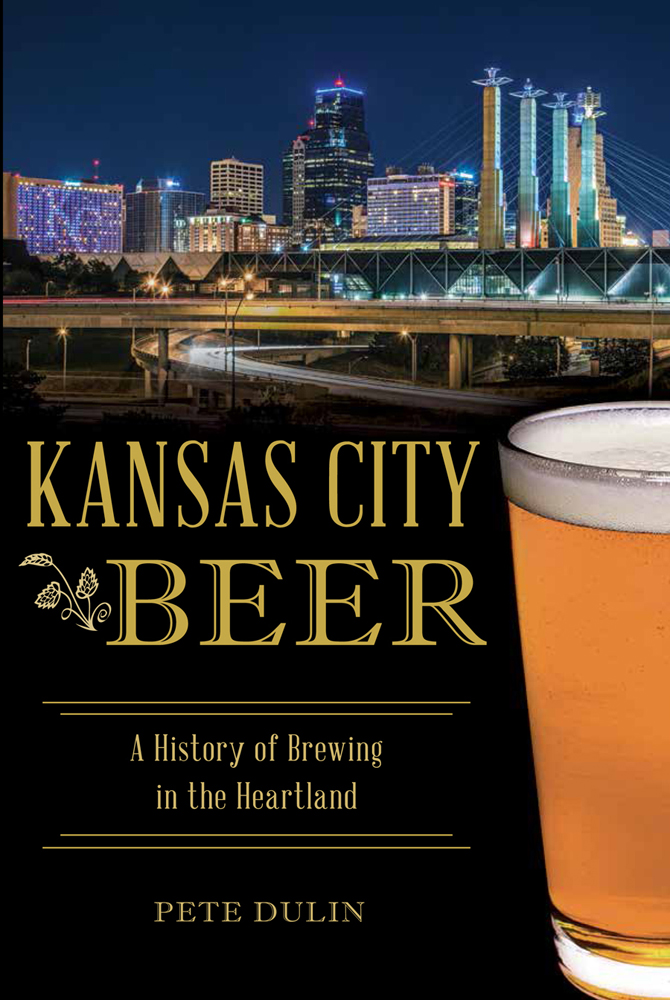 In the coming months, I will share more back story and notes on the research and writing process behind the book. For example, the black-and-white photograph above, courtesy of the Jackson County Historical Society Archives, depicts workers at Ferdinand Heim Brewing Company. In 1887, Ferdinand Heim, Sr. of St. Louis purchased a sugar refinery and acreage in the East Bottoms and built a new brewery on the northeast corner of Guinotte Street at Agnes. Today, Local Pig butcher shop and the Pigwich food truck are located near that intersection on the former brewery grounds.

This is my first book that delves into the history of breweries and Kansas City from the 1850s to present. I’m excited for the book to be released. It comprehensively covers historic and contemporary breweries with bits of history from Kansas City and regional and national events.

The photograph of Kansas City on the book cover was shot by Roy Inman. Roy is a fine local photographer known for shooting the iconic shot of the KC Royals World Series rally at Union Station. I’m thankful to feature his photography that depicts downtown Kansas City’s skyline in such dynamic fashion.

If you have questions about Kansas City Beer or the city’s brewery history, drop me a line.