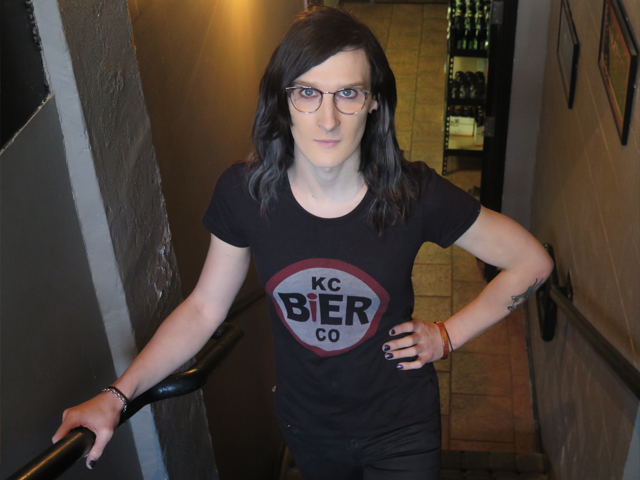 Sloane Dominick got her dream job at Kansas City Bier Company in Kansas City, Missouri, on February 14, better known as Valentine’s Day. Less than four months later, she worried about how a major life change might affect her career.

Previously, Dominick worked as a beverage manager at World Market but sought a change.

“I wanted to be on the production side of brewing,” Dominick said. Even after Dominick landed the brewery job, she said, “I felt like I was missing something.”

Professionally, the job fulfilled Dominick’s goal. She was initially hired in 2017 to work as a bartender and server at Kansas City Bier Company. She worked on the brewery’s bottling line and volunteered for odd jobs as the brewery grew. As a draft technician, she cleaned lines and even devised a method that saved Kansas City Bier Company around $1,800 a year. Personally, Dominick had a long-buried secret hidden behind a wall of uncertainty.

Valentine’s Day is named after St. Valentine of third-century Rome. The name Valentinus is  derived from the Latin word for worthy, strong, or powerful. Over time, Valentine has come to represent the patron saint of couples, marriages, and the romantic February holiday. For some, Valentine’s Day is celebrated with flowers, heart-filled greeting cards, chocolate, and expensive dinner. Others reject the day as a make-believe ritual of commercialized marketing or view it through the prism of heartbreak and longing.

After launching a brewing career on this day, Dominick faced a pending choice to be strong and powerful enough to disclose her secret, or she could maintain a make-believe way of life that had already taken a toll.

In June 2017, Dominick chose to come out as transgender with a new assumed name.

“I talked about it with a friend,” said Dominick. “We discussed it and decided that I would go forward with coming out. I came out with my name Sloane on Facebook. I was afraid.”

The announcement was a decision to finally and publicly part with her previous gender and step into her feminine identity. In a way, coming out was both a breakup and an embrace of a true self she always knew existed.

That same night, she also made the announcement to friends and brewery coworkers while attending a Dogfish Head Brewery event at Bier Station, a local craft beer taproom. However, she was unsure how her coworkers would respond.

“The next day I went into work and my new name was listed on the schedule. Everyone was accepting of me,” Dominick said. “I didn’t want to give up my dream job. I feel like I was Sloane since I began working at Kansas City Bier Company. They have been nothing but supportive.”

Dominick suffered from depression for years. After making the announcement and sharing her new name, Sloane, she felt relieved and knew it was the right decision.

“I’ve known my entire life. I’ve been working on this since I was a small child,” Dominick said. I tried to bury it and focus on other things. But it’s like putting the wrong fuel in the car. It won’t run right. For twenty years, I’ve known something wasn’t right.” 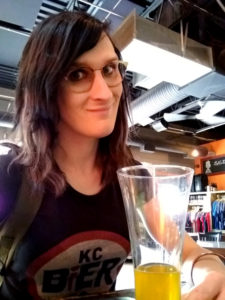 “I didn’t know that transgender was even a thing until I was 13 or 14,” Dominick said. “I had to find information on a computer and find out myself.”

Growing up, Dominick didn’t like to be made to play sports or placed into a male gender role.

“I just wanted to be me. I didn’t understand until I figured out the word for it,” Dominick said. “For ten years, I buried it. Bottled it up. Sometimes, something would trigger me and I would express it.”

Long before coming out as trans, Dominick saw a therapist to address her feelings.

“The therapist gave me bad advice,” Dominick said. “I went back in the closet. I kept it hidden as  a teen. I felt guilty about what I was doing. I told my mom when I was around 22, but nothing came of it.”

Later, Dominick told her mother about being transgender a second time. “I told her that she knew. She did,” Dominick said. “She’s been accepting of me and uses my name and correct pronoun.”

Dominick explained that the pronouns “she” and “her” apply to her as a female. “I’ve never been anyone else.”

Dominick first took estrogen on September 8, 2017. Before taking the prescription, she was required to see a therapist. Then Dominick was referred to an endocrinologist.

“The whole process took three months,” Dominick said. “It was the hardest three months I’ve ever had.”

Initially, Dominick wasn’t sure how quickly the estrogen would affect her. She had planned to transition socially at first. The physical impact of the prescription would take time to manifest, but the psychological response was more sudden.

“Twenty years of depression were gone when I took estrogen,” Dominick said. “I thought, ‘This must be what normal people feel like.”

Dominick’s figure began to develop more curves. She said, “I began to see myself how I wanted to see myself. The depression was gone. I finally was allowed to be myself. My brain runs better on estrogen.”

To formalize the gender transition, she legally changed her name to Sloane Dominick. 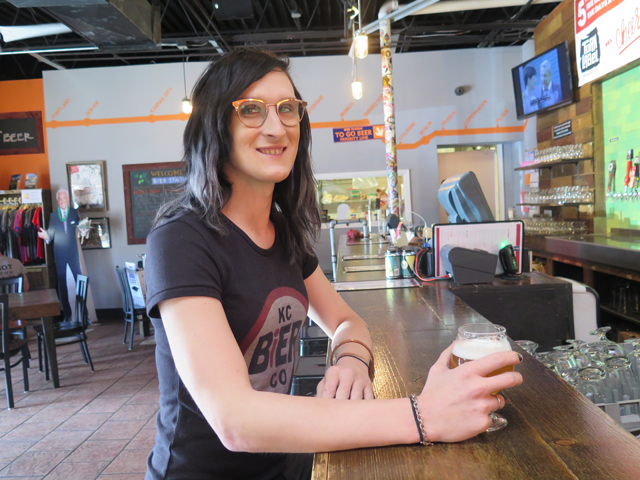 Kansas City Bier Company continues to be the place where Dominick clocks into her dream job. She also works a second job as a draft technician at The Belfry taproom and helps owner Celina Tio with beer and spirit tastings, dinners, and events.

Naturally, she continues to be a fan of craft beer. “Beer is so interesting and enjoyable,” Dominick said. “It has so many flavors.”

Socially, Dominick feels at home within the craft beer community.

“The Kansas City community is cool and accepting,” Dominick said. “It’s good to feel part of it.”

Dominick actually didn’t drink until she was 23-years-old and started drinking vodka and whiskey.

“I caught onto craft beer about four years ago and got into it as a hobby,” Dominick said. “There’s so much to discover. It’s interesting. There’s a sense of community, where I can hang out. There’s always something going on.”

Now, Dominick favors saisons, wild ales, and sours. Lambics and brett.-based beers were some of the first she explored.

“Boulevard Brewing’s Spring Belle was a formative beer,” said Dominick, referring to a 2015 seasonal Belgian-style saison made with flowers.

Dominick said, “I came up with the name and concept, then pitched the idea to John Couture at Bier Station.”

That’s the beauty and heart of craft beer. As one of mankind’s oldest beverages that predates even St. Valentine of Rome, beer is not trapped in traditional styles and roles. Craft beer continues to evolve and grow. The talent, creativity, and imagination of skilled brewers and collaborative partners defy limitations. Similarly, the community of craft beer grows stronger by resisting limits and being true to each other and to the social and inclusive nature of beer.

Dominick summed up her connection to craft brewing as a simple yet powerful statement.

“Craft beer is part of my life’s calling,” Dominick said. “I was meant to be in beer.”