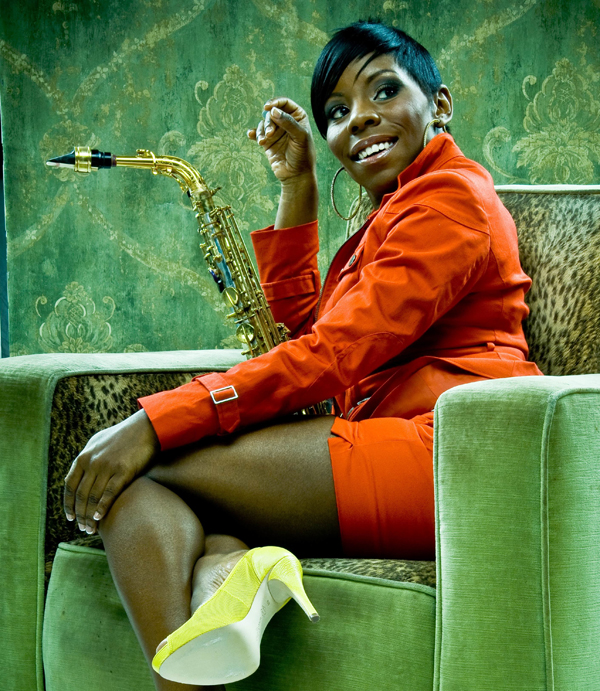 Tia Fuller shares insight into her career as an accomplished jazz saxophonist, composer, and educator.

Tia Fuller, who also toured with Beyoncé as a member of the R&B superstar’s backing band, offered insight into her career as a female working in the music industry at an artist talk in KC in March 2008. While in town, Fuller and her all-female touring band––pianist Shamie Royston, bassist Miriam Sullivan and drummer Kim Thompson––performed at the Blue Room.

Raised in a musical household, Fuller began learning classical piano and flute from the age of three through age 13. Her father played bass and her mother sang. “From my earliest age, I remember hearing them rehearse in the basement of our house. I grew up hearing John Coltrane, Sarah Vaughan, and Charlie Parker. I didn’t understand it and didn’t really like it until I started playing saxophone and experiencing the music for myself,” she says.

She continued her jazz studies in high school, where she switched to saxophone, and into college, where Fuller earned a Masters Degree (M.M.) in Jazz Pedagogy and Performance from the University of Colorado in Boulder.

Fuller moved to Jersey City, incidentally just two days before the September 11 terrorists’ attacks on the World Trade Center and the Pentagon. “I thought it was an omen that I shouldn’t move out here,” she recalls. “Actually, the event forced me to hustle, because the word on the streets, in the jazz community, was that there was very little work. My first gig was playing in a big band at a fish fry in South Jersey.”

Fuller did hustle and began to rise in the New York jazz community. She met musicians such as saxophonist Brad Leali, who at that time played in the Count Basie Orchestra. He circulated Fuller’s name as a skillful saxophonist capable of doubling on the flute in the jazz community, Since then, Fuller has progressed as a musician and released two albums, the impressive debut Pillar of Strength (listen to a sample) and her sophomore release Healing Space.

As a composer, Fuller is well-versed in bop, R&B, hip-hop, gospel, and Latin influences. She is also a dedicated educator. Fuller continues to be involved with music education by currently serving as the director of the Jazz Museum in Harlem’s “Harmony Ensemble.” She also conducts clinics, residencies, lectures and master classes.

In this PresentMagazine.com interview, Fuller shares advice about developing as a musician.

Present: Kansas City is blessed with a rich legacy and active community of jazz musicians including talented jazz vocalists, but there are few women jazz artists. What advice would you give to young women studying music in school or considering music education?

Tia Fuller: The advice I would give to women is to focus on being a great musician. Don’t allow negative experiences and the outside world dictate your purpose. Utilize all opportunities and experiences as stepping stones, toward your musicianship and character.

Present: You grew up in a musical family, studied jazz in high school and college, and learned from performing gigs in the New York scene. How did these various experiences reinforce your interest and improve your skill level as a maturing artist?

Fuller: These experiences have reinforced my interest and improved my skill level by constantly being in an environment of inspiration. In order to inspire you have to be inspired. My experiences have also taught me that music…life is full of infinite possibilities. You just have to have to move forward in faith and not fear.

Present: What are some common challenges for young jazz students in terms of technique, knowledge, or other areas?

Fuller: The most common challenge that I see in younger musicians is not having a clear concept of “sound,” and the “language” of the instrument. Listen to the greats and immerse yourself in the music, to the point that you can hear the sound you are trying to create in your head…before producing it through your instrument.

Present: Outside of learning how to play an instrument well, what other skills does a working musician need to learn and achieve in the music business?

Fuller: Other skills that students must achieve as a working musician is being a businessman or woman. Sending press kits, CDs, follow through with calls, networking and building healthy working relationships that create a win-win situation. Also, being a band leader, you have to communicate effectively and facilitate the things that you want done or put people in place to do those things. Ultimately, have a clear vision of where you want to go and aggressively pursue how you are going to get there, while maintaining a pleasant, yet business savvy attitude.

Present: Who were/are your role models in music or other fields? Why?

Fuller: Maya Angelou, Denzel Washington, Branford Marsalis, Serena Williams. All of these individuals push the envelope and walk in a clear and decisive vision path in their life. They are constantly in a state of evolution…no matter how old, no matter how hard, they turn their trials and visions into a tangible reality.

Present: Why is your latest album called “Healing Space?”

Fuller: In the midst of of brokenness and life’s challenges, “Healing Space” is a place that is created within oneself…a place that is your ultimate peace, restoration, enlightenment, and renewal.

Present: You began learning to play the piano at the age of three, and have studied and performed throughout your life. What excites you about music today? What experiences in life inspire you to create music?

Fuller: The ability to give back positive and uplifting energy and the ability to seek and discover through your instrument daily! The infinite possibilities that life brings continue to inspire me.