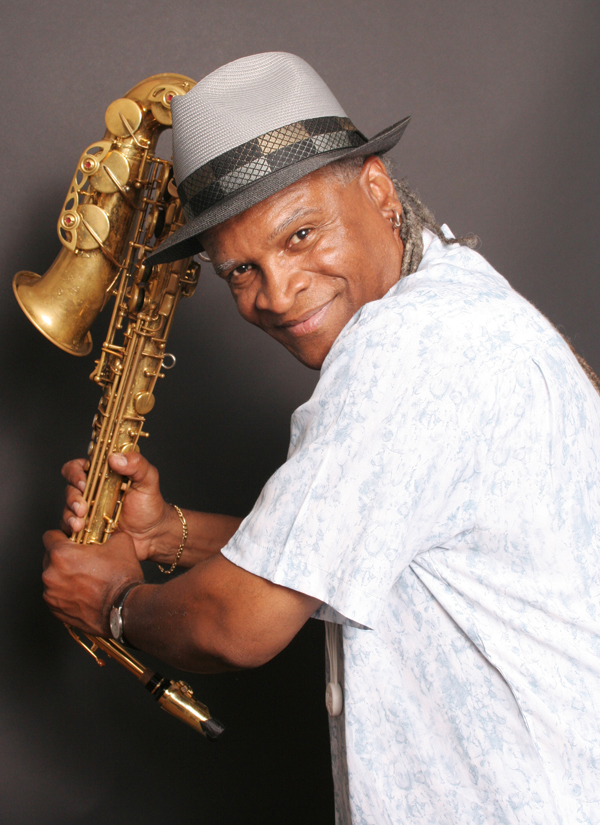 Sheet music for “Ruby, My Dear” by Thelonious Monk rests on the Steinway Piano in Bobby Watson’s office.

A photograph of master drummer Michael Carvin, who played recently with Watson at The Blue Room, decorates the office located in the lower level of the performing arts center on the University of Missouri-Kansas City campus. Watson sits at his desk, wearing loose brown corduroy and a smooth mocha-colored suede shirt. Numerous mementos, awards, and other photographs attest to his livelihood as an accomplished jazz saxophonist and sought-after composer. He has over two dozen recordings as a leader and appears on nearly 100 other recordings as either co-leader or in a supporting role for other musicians. Apart from his popular and critical success, another side of the jaded business of music awaits. Watson has the following quote by Hunter S. Thompson posted on the office wall:

“The music business is a cruel and shallow money trench, a long plastic hallway, where thieves and pimps run free, and good men die like dogs. There’s also a negative side.”

The quote quashes any idealism about the music business, serving as a notice for aspiring young students that seek tutelage from the revered saxophonist and mentor. In 2000, Watson was selected as the first William D. and Mary Grant/Missouri, Distinguished Professorship in Jazz Studies at UMKC. For the past six years, he has taught as the director of jazz studies at the University of Missouri- Kansas City, Conservatory of Music. Watson’s prolific career stands at odds with Hunter S. Thompson’s cynicism; some good men thrive beyond the greedy clutches of the music industry.

Bobby Watson was born in Lawrence, Kansas, to Robert, Sr. and Lahoma Watson. He grew up in Kansas City, Kansas, but lived in Minnesota during his high school years. The family moved to the upper Midwest because of his father’s work, then returned to Kansas City in the early seventies. Robert, Sr. was the first black flight inspector for the Federal Aviation Administration. Watson’s father also plays saxophone and inspired his son’s early interest in music. However, young Bobby did not start out learning the saxophone like his father. “I grew up listening to my dad play in church. In the fifth grade, my dad and the band coordinator conspired to have me start with the clarinet,” says Watson.

The time spent learning clarinet helped him prepare for the saxophone later. Watson picked up the tenor sax in high school and later gravitated to the alto sax when the band received new instruments. “I was attracted to the alto. It was beautiful and closer to my sound. I liked the way it looked,” Watson recalls. Soon, Watson formed an all-instrumental funk band and began playing the equivalent of smooth jazz today. “We were playing Aretha; James Brown; Gladys Knight; and Blood, Sweat, and Tears. We had smooth jazz before the phrase existed,” he says.

Watson trained formally at the University of Miami, and then headed to New York after graduating for the beginning of a long career that still has no signs of slowing down. He worked in New York for twenty- five years, performed with Art Blakey’s Jazz Messengers from 1977 to 1981, and eventually became the musical director for the esteemed group.

During his career, Watson has performed with a roster of celebrated musicians including drummer Max Roach, saxophonist Branford Marsalis, multi-instrumentalist Sam Rivers, and trumpeter Wynton Marsalis. He has supported well-known vocalists such as Dianne Reeves, Lou Rawls, Betty Carter, and Carmen Lundy. Along with bassist Curtis Lundy and drummer Victor Lewis, Watson launched the first edition of Horizon, an acoustic quintet of modern jazz that earned accolades as a preeminent group during the mid-80s through the mid-90s. Watson led the Grammy-nominated Tailor-Made Big Band that provided a stretch for his artistic vision. Also, he was a founding member of the acclaimed and innovative 29th Street Saxophone Quartet, an all-horn, four-piece act unheard of in its time. “Club managers had a hard time getting used to the idea with no rhythm section. With four saxophones, we rocked the house. It’s like a string quartet, it sounds complete,” Watson says with conviction.

Eventually, Watson returned to Kansas City when offered the chance to head the UMKC jazz department under the Distinguished Professorship. “The timing was good. It was always in the back of my mind to teach at UMKC,” says Watson. “It’s a real opportunity and blessing.” The position gives him flexibility to play gigs that pop up throughout the country in the Midwest and on the East Coast. He toured overseas extensively with the 29th Street Sax Quartet. “New York is great. I like playing the Midwest, I like playing in America,” says Watson. ”I played in Europe for the bulk of my years, opening for Miles Davis and Dizzy Gillespie. Europe was good, the gigs were great on TV, radio, and clubs. But this is where I live. It’s important to make contact with people in the States. Here, there’s lots of work to be done.”

The professor of jazz applies his craft at UMKC, teaching students and taking them out to demonstrate their ability. Watson traveled to Europe with UMKC’s Jazz Big Band in July for a ten-day tour where they played at the Montrose Jazz Festival. ”I’m proud of the students. We have great teachers, a lot of the top talent in Kansas City come to the classes. Joe Cartwright, Stan Kessler, and Dan Thomas,” says Watson.

During the school year, students and working jazz musicians alike gather at Mike’s Tavern on Thursday nights for jam sessions, “a live laboratory” as Watson refers to it, open to anyone that wants to play. “Congressman Cleaver said, ‘Jazz was born in New Orleans, but grew up in Kansas City,’” Watson says. The congressman and musician speak truth. Kansas City has a jazz tradition that cannot rest on its heritage. Jazz grew up in Kansas City, but lives and prospers with a vitality practiced by a wealth of talented local musicians–– Tim Whitmer, The Elder Statesmen of Jazz, The Scamps, Lisa Henry, Dennis Winslett, David Basse. The list is endless. Equally important, the future of Kansas City jazz depends on expanding the audience to newcomers willing to learn, enjoy, and support working musicians. Whether performed at The Blue Room, Jardine’s, The Phoenix, the Gem Theater, the rehearsal rooms by neophyte students, or in the wee hours at the Mutual Musician Foundation by masters, jazz lives and breathes and reaches out into the night. Kansas City is fortunate to have living legends like Bobby Watson practice and perform in our midst.

On Learning
Watson works with the Thelonious Monk Institute of Jazz in Washington, D.C., as part of the “Jazz in America” program. He has been teaching as part of this initiative for over ten years, acting as a musical ambassador to students in Florida, Kentucky, Ohio, Texas, and even Alaska. Watson conducts one-hour ”in formatives” for high school students, performs, and teaches a master class. “I break down a jazz chord versus a regular chord. We talk about the function of bass and drum and count out the beats. We do call-and-response,” says Watson.

“Listen to a lot of traditional music. The further you go back, the more you know, and can go forward. Listen to older cats like Lester Young, Ben Webster, and Duke Ellington. Use imagination. Imagination is key. It’s a gray area that separates musicians. Love yourself and your sound. Be fearless.”

On Performing
“Do it for love, not fame. Give 100 percent every time and play. Give an A for effort, it will come to you. The music will take you where you need to be. Fame is a byproduct,” says Watson with a frown. ”Recognition may come later. If they persevere, they can be recognized. Fame is an empty word. All you need is a little scandal now to get fame. More people know Monica Lewinsky than Duke Ellington.”

On His Saxophone
Watson’s custom Yamaha Series 2 saxophone has no lacquer, lending the instrument a worn, aged appearance from oxidation that changes the color of brass.“I like the way it looked. The neck is shiny because it’s gold-plated which affects the sound. It works for me,” says Watson, with a shrug. “Silver is darker. Gold has a brighter sound. Brass has more color to the sound because it’s a mix of alloys. I have a bright sound and am always trying to darken the sound. I picked the neck out first, then the body. The neck is where everything is.”

Performing in Washington, D.C.
In September 2006, Kansas City vocalist Lisa Henry and Watson performed their version of “Kansas City” at the White House as part of the Thelonious Monk Institute of Jazz dinner. Barbara Walters hosted the event that was attended by Herbie Hancock, George Duke, and Anita Baker. “We opened the show,” says Watson. “PBS filmed the performance and it should air in April.”

Recommended Listening
Love Remains, Red Records
Watson’s classic 1986 release has long been recognized by the Penguin Guide to Jazz with its highest rating. The 60s-influenced album was identified in the Penguin Guide’s seventh edition as a part of its ”core collection.”

Post-Motown Bop, Blue Note Records Watson dubbed this recording and jazz style “post- Motown bop” after the sounds and artists from the heyday of the Motown era that influenced him while growing up. “It was a label I gave myself to define myself before others did,” he says.